5 A Side Tournaments Kick Off in Edinburgh

5 A Side Tournaments Business Fives Kick Off in Edinburgh

The 5 A Side Tournaments got underway with a presentation from Scottish Housing News and Scottish Construction Now editor, Kieran Findlay which has formed a partnership with Business Fives.

Firms from across the sector took part in the 5 A Side Tournaments with the day kicking off with an icebreaker friendly warm up match where new connections across the sector were made. The Companies taking part were Savills, Link Group, Dunedin Canmore, GVA, Capital City Electrical, Michael Laird Architects, Weslo HM, Comprehensive Design Architects and Thomson Gray.

The 5 A Side Tournaments format saw three groups of teams battle to qualify for Champions League.

For those who didn’t finish in the Champions League slots, they contested the Europa League – with an Intertoto Cup play-off to decide some of the final Europe positions.

In the 5 A Side Tournaments Champions League, the semi-finals were contested between Comprehensive Design Architects, Dunedin Canmore, Capital City Electrical and Thomson Gray.

Both 5 A Side Tournaments finalists also booked their spots in the grand final at Soccerworld in Glasgow in March 14th.

In the 5 A Side Tournaments Europa League final – which also provides a team with a route to the grand final – GVA beat Weslo HM 4-2 to qualify.

Tournament ambassador Pat Stanton presented the prizes to the winners – and singled out Ed Barbirou as the man of the match in the final for a super defensive display.

He then conducted a question and answer session with the teams to round off the day.

Both GVA and Capital City Electrical will go on to try and win the Business Fives donation for their chosen charity Alzheimer Scotland.

They will go on to join teams from Edinburgh, Glasgow and Aberdeen in the 5 A Side Tournaments finals before the Business Fours, National business golf events. 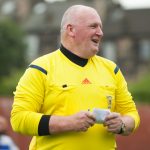 Five A Side Rules Business FivesUncategorized