Five A Side Rules Business Fives

Five A Side Rules Business Fives General Five A Side Rules:

Here are the Five A Side Rules for teams taking part in Business Fives events:

Teams must consist of at least 5 players, 1 goalkeeper and 4 outfield players

Squads can consist of up to 10 players, rolling subs allowed during each match.

Team entry costs £350 + VAT and fees must be paid prior to taking part.

Matches will be independently refereed to the Five A Side Rules, there is a zero tolerance policy for lack of respect towards referees.

Spaces are limited at each event and teams are allocated on a first come first served basis.

Players are required to register and sign a waiver at 2pm on the day of the event.

Five A Side Rules of play

1: Matches are 10 minutes long and there is no change of ends.

2:  In the round robin stage 3 points will be awarded for a victory and one for a draw.

3: Substitutions will be rolling throughout the game with one on, one off.

4: Backpasses to the keeper will only be permitted once the ball has touched 2 or more outfield players from the team.

5: The keeper may not come outside of the D.

6:  The ball may be played above head height.

7: Slide tackles are not permitted.

8: When someone scores, play will resume from the keeper.

9: Outfield players are allowed in the goalkeepers area but may not touch the ball inside the D, if they do a penalty will be awarded against both offensive and defensive players.

10: Players may score from free kicks and defensive players must stand two yards from the ball.

11: If the ball leaves the pitch, play will resume with a kick in.

12: Players may not score direct from a kick in.

13: Swearing at the referee is an automatic sending off offence.

14: The referee’s decision is final. The referee may send off any player for verbal abuse.

15: ALL players must wear shinpads.  The onus is on the players to mitigate any potential risks involved in playing football and the orgainser accepts to no liability for any injuries that may occur on the field of play.

16: A red card in any match will result in the player being excluded for the rest of the tournament.

19: If teams are not at the correct pitch 2 minutes before kick off time they will forfeit the game 3-0.

20: For the knock out rounds sudden death penalties will decide any games that end in a draw.

21: Round robin group positions will be decided by points, then goal difference, then goals scored, then goals against, then the head to head result against that team in the group. In the highly unlikely event that teams are still equal when all this is taken into account, then progression to the knockout stages shall be settled with a sudden death penalty shoot out.

22: If a team receives more than 3 red or yellow cards this may lead to disqualifcation.

23: The organiser reserves the right to remove any team from the tournament at any time for not adhering to the Five A Side Rules.

5 A Side Tournaments Kick Off in EdinburghUncategorized 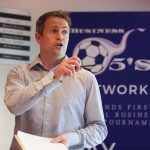