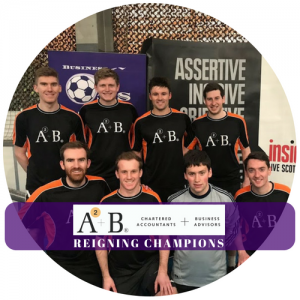 This August the 2018 Summer Season of the

With continued support from Aberdeen and Grampian Chamber of Commerce the Professional Services Event will take place on Thursday 16th August and the Energy Event will take place on Friday 17th August. The Aberdeen five-a-side tournaments allow companies a unique opportunity to change the office for the football pitch, turn colleagues into team mates and make some new connections with the teams they are playing alongside all whilst raising money for charity at the same time.

Business Fives will visit Edinburgh, Glasgow, Aberdeen, Dundee and Inverness with 11 events throughout the summer before returning to Edinburgh for the National Final on September 26th.

The two events will see companies from across Aberdeen try to take the title from the reigning champions, A²+B.

Each business taking part in the Aberdeen five-a-side tournaments will be asked to nominate a charity partner to play for and will compete not just for the title of champions but for a bumper donation from Business Fives. With an aim to raise more that £25,000 Business Fives will continue to donate 10% of revenue to the champions chosen charity.

A range of companies from the city have already signed up with Shell, Aberdeen Airport, Norco Group, Acumen and Bon Accord involved so far.

Can you take on the previous champions? Want to get involved?

Swap your desktop with your football top this summer

At Business Fives we run corporate charity events.  We host and design amazing Football, Golf and Esports events for our clients.