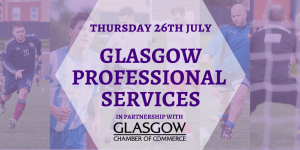 Supported by media partners insider.co.uk and industry partners the Glasgow Chamber of Commerce 12 teams competed for another three places at the National final

Sponsors Ladbrokes Coral raised £800 in support of the Michelle Henderson Cervical Cancer Trust with other highly commendable fundraising efforts bye iomart who raised £1,000 for the Juvenile Diabetes Research Foundation and Sure Thing who held a number of fundraisers to donate £1,120 to the Airdrie Foodbank all by taking part in the Glasgow Charity Football tournament.

After the initial round of games companies made their way into the Champions League and Europa League sections and laterally on to quarter finals of both competitions.

The Glasgow Charity Football final was played between iomart and Grant Thornton with both teams safely securing passage to the National final edinburgh on September 26th.  The accountants ran out 4-2 winners in the end with Phil McNicholas adding to his goal scoring tally to finish as top scorer on 10 for the event. Teammate Danny Harvey was singled out by ambassador Tosh McKinlay as the payer of the match in the final.

Meanwhile in the Europa League section the semi-finals were more one sided with Erskine Technology Campus winning 6-2 against Digital Impact and Edrington overcoming Sure Thing 2-0.  It was the drinks giant who ran out winners in the final and booked their place in the national final with a 5-2 victory.

The action continues next week with the Technology & IT industry meeting on Tuesday in Edinburgh before returning to Glasgow when the Energy and Utilities sector gathers on Thursday.