Business Fives got underway with Glasgow Football Event, the first of the winter series

Sponsored by Malones Glasgow Business from across the city took part in the sixth season of the national business five-a-side tournament for footy loving firms.  The Glasgow Football Event tournament has been supported by Insider.co.uk as well as the Glagsow Chamber of Commerce and the city lived up to its billing as the footballing capital of Scotland with 174 goals across 30 matches averaging at almost 6 goals per game in an action packed event. 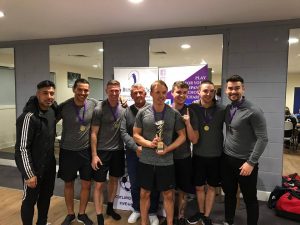 The semi-final line-up of the Glasgow Football Event was made up of sponsors Malones Glasgow, North Lanarkshire Leisure, ENVA and NRS group with the Europa Europa League section semi-final line-up composing of Glasgow Airport, Santander, Multiplex and Scottish Gas Networks.

The North Lanarkshire Leisure Team eventually saw off competition the title overcoming a previous event winner ENVA in the final who won the tournament as William Tracey group before their rebrand. ENVA managed to become the first team to beat Malones Glasgow after they won their opening 5 matches thanks to 10 goals from joint tournament top goal scorer Kieran Turner.

North Lanarkshire Leisure held out to beat NRS Group 2-1 in a tense semi-final, the two players of the tournament came from that match with NRS Group’s, Louise Dunn winning the Player of the Tournament award and NL Leisure’s star player Conor Ferns being singled out by Bobby Petta and Iain Ferguson as their man of the match in the final. In the Glasgow Football Event Europa League section Santander were helped by fine scoring from Graeme Crawford who’s goalscoring prowess seen him share the golden boot. Santander overcame Multiplex in the final of that section after they have been Glasgow Airport who has shown plenty of early promise on the pitch.

All three teams, NL Leisure, ENVA and Santander will make their way to Edinburgh for the national final on March 22nd but before that Business Fives has action in Edinburgh, Aberdeen, Dundee , Glasgow before travelling down south to the North East of England for the first time. They will all go on to play for Business Fives charity donation with SQA providing the notable fundraising efforts from the event raising £165 for SAMH ahead of the event.

Former Celtic and Rangers stars, Bobby Petta and Iain Ferguson entertained the players during the after tournament drinks reception sharing stories from their playing careers and sharing expectations for the rest of the season for their respective clubs former clubs at the Glasgow Football Event. 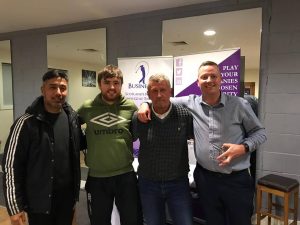 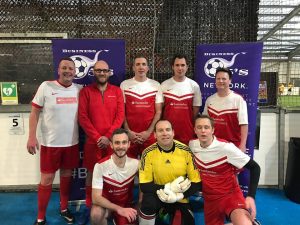 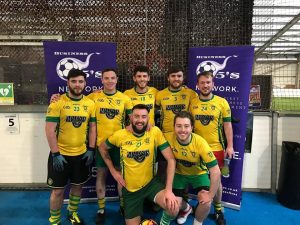 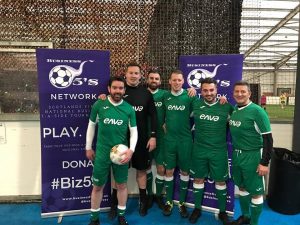 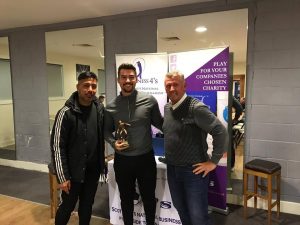 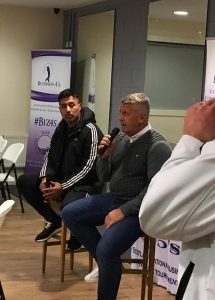