Business Fives Tayside Football Event is back this Summer

Business Fives Tayside Football Event kicks off in the City of Discovery in the middle of August with the 5 aside tournament returning following the success of previous events with the event being supported by the Dundee and Angus Chamber of Commerce. 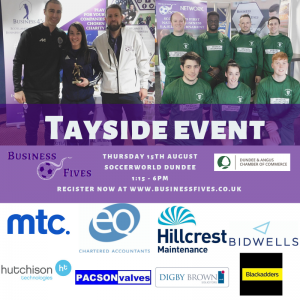 To date over £82,500 has been raised for charities across Scotland as a result of the corporate football events and this summer the aim is to surpass the £100k milestone.

Tayside firms have the opportunity of qualifying for the national finals on Thursday 15th August. The five a side events for football loving firms will take place in 6 Scottish cities this summer as well as venturing south to 9 English cities for the first time.  The Scotland events conclude with the national final in Edinburgh at the end of September where the national business five-a-side summer champions will be crowned.  With 2 out of the last 3 season winners coming from the Tayside region the area has good pedigree.

We are pleased to once again be partnering with the Dundee and Angus Chamber of Commerce following the success of the partnership in recent years. Getting the chance to bring sectors together while promoting a healthy and active lifestyle is fantastic and given the companies already signed up for the Summer event in Tayside that include mtc Media, Digby Brown, Hillcrest HA, EQ Accountants, Blackadders, Bidwells, Pacson Valves and Hutchinson Technologies, etc are all involved, and it promises to be another great event.

As a socially conscious company Business Fives have again committed to awarding the winning team with a generous donation to their chosen charity of 10 per cent from all of the event’s revenue.  Local charities in Tayside being supported by the companies taking part include Maggie’s, MacMillan, Scottish Charity Air Ambulance, Wellbeing Works Dundee and Archie Foundation.

Business Fives ambassadors that have been along to the Tayside event include former Dundee and Celtic goalkeeper Rab Douglas and former Dundee United defender Séan Dillon at our Tayside Event for a Question and Answer session at the drinks reception.

Tournament founder and Business Fives managing director John McClarey – who also organises a highly-successful Business Fours golf tournament – says “We are delighted to be hosting an event in this cultural city where Business Fives has already had success in and are thrilled with the response from the business community so far.  We’ve been really impressed at the charitable efforts from the area of Tayside that has lived up to its reputation of having communities at the heart of their work.  Given the mix of companies we’ve had involved it promises to be another good networking opportunity.”