Business Fives – the company that hosts sports events creating a charitable impact in the local community makes its debut in the City of Culture on Tuesday 10thSeptember. 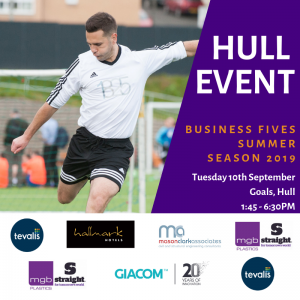 Business Fives have recently surpassed the £100,000 mark raised for charities as a result of the corporate football events and there is no plan to stop there. With a host of local business in Hull already signed up the event represents an excellent opportunity for teambuilding and networking for football loving firms as well as raising money for charity simultaneously.

Hull firms have the opportunity to become champions on Tuesday 10thSeptember.  The five a side events will take place in 9 English cities for the first time during the summer before the tournament concludes with the national final at the start of October where England’s first national business five-a-side summer champions will be crowned in Leeds.

Getting the chance to bring firms together while promoting a healthy active lifestyle is fantastic and given the companies already signed up for the Summer events in Hull it’s shaping up to be a cracking introduction to the city. Companies involved so far include Tevalis, Straight, Alan Wood & Partners, Paragon HDX, Hallmark Hotels, Mason Clark Associates, 360 Accountants, Giacom World Networks and AB Ports with limited spaces still available.

As a socially conscious company Business Fives have again committed to awarding the overall winning team with a generous donation to their chosen charity of 10 per cent from all of the event’s revenue.

Business Fives ambassadors former Hull players Peter Swan and the play-off final hero in 2008 Dean Windass will be along at the Hull event for a Question and Answer session at the drinks reception.

Tournament founder and Business Fives managing director John McClarey – who also organises a highly-successful Business Fours golf tournament – says “With so much positive events and good news coming out of the UK’s City of Culture we are really looking forward to our Hull event. We are delighted with the enthusiastic response from the local businesses that have reached out to get involved and really looking forward to seeing the skill levels on show but most importantly supporting charities in the local community. Given the mix of companies we have involved it promises to be another good networking opportunity.”