Business Fives make its debut in Bristol as 21 companies take part for their chance to be part of our England Winter Season Final in Manchester this year. 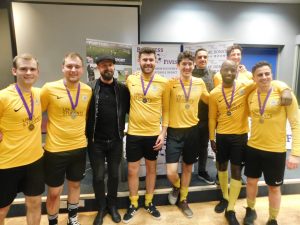 Former Bristol City stars Louis Carey and Scott Murray came along to present the individual and team awards and provided some comical stories from their time as professional footballers after the action on the pitch. 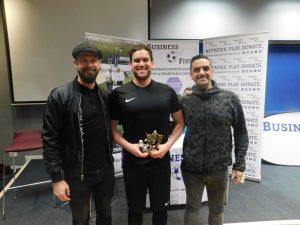 With charitable giving being a huge driver behind Business Fives, the combined effort from the companies who attended our Bristol event raised an incredible total of £3,044. With notable contributions coming from Top Fundraisers, PeopleSource who raised £700 for Mind charity, Ocean home who raised £638 for the Jessie May Trust, Techmodal who raised £552 for Off The Record Bristol and Conscious Solutions who raised £594 for Cancer Research UK. 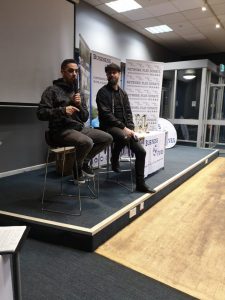 On the pitch the action was relentless with 258 goals scored in 68 matches with fixtures coming thick and fast.

Booking their place via the champions league route were PeopleSource and Unite Students. Joining them in the Final will be VWV, who beat Freeths in the Europa League Final 1-0.

The Champions League final proved a heart racing watch, with the IT Solutions Consultancy,  PeopleSource, scoring 3 goals against Unite Students.  Although they gave a valiant effort, Unite Students lost 3-1. The PeopleSource team kept up the winning streak by adding to their Top Fundraisers trophy. Continuing their success, Jack Williams was named both the top goal scorer with 18 goals, and chosen as man of the match by Louis Carey and Scott Murray, meaning the company took home a combined 4 trophies from the event. 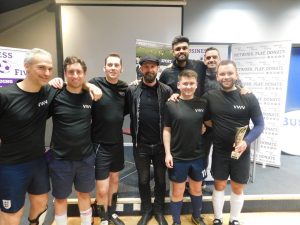 The Europa League final matches were played out between Freeths and VWV, with the close match finishing 0-1 in VWV’s favour.

Another noteworthy mention comes from Sahra – Marie Tulloch, who took home our Player of the match trophy for her efforts in the Conscious Solutions team.

Business Fives winter season culminates in Manchester on Wednesday 8th April where teams from all over the country will bid to become the national Business Fives champions and win a bumper donation for their chosen charity.  Before that the events will visit Newcastle, Manchester, Sheffield, Liverpool, Leicester, Birmingham, York, Leeds and Hull.