Business Esports April 2022 Round Up

Previous Warzone champions, Silverchip, returned to the April event in the hope of defending their title and adding to the donations they have previously secured for The Christie. The team faced other previous rivals including Novatech and Tisski. Other returning clients included Openmoney, and Sabio, as well as Avoloq and Cimteq making their Business Esports debut.

After finishing top of the league after the first night of gaming, it was Novatech who kept the standard high and were crowned the Business Esports April 2022 Warzone champions! The team won a £150 donation for a charity of their choice.

In the Rocket League tournament, it was Sabio and Cimteq who topped their groups and went on to play Openmoney and Avoloq in the Elite semi-finals.

Victory saw Openmoney and Cimteq progress to the Elite final and Sabio and Avoloq played an intense third place playoff round. Making it to the fifth round to decide who would have bragging rights of third place. Eventually, it was Sabio who managed to secure the final win against Avoloq.

Already having played some tight matches in the opening night, the Openmoney vs Cimteq final was set to be a good one.

In the end, it was a reversal of the opening nights result. Openmoney went 2-1 up and then managed to hang on and get the all-important third win, to crown them Business Esports April 2022 Rocket League champions! Openmoney secured a £150 donation for Wood Street Mission.

Business Esports continue later in the year with the next event scheduled for Wednesday 30th November. You can register your interest in the November event here. 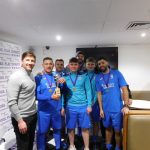