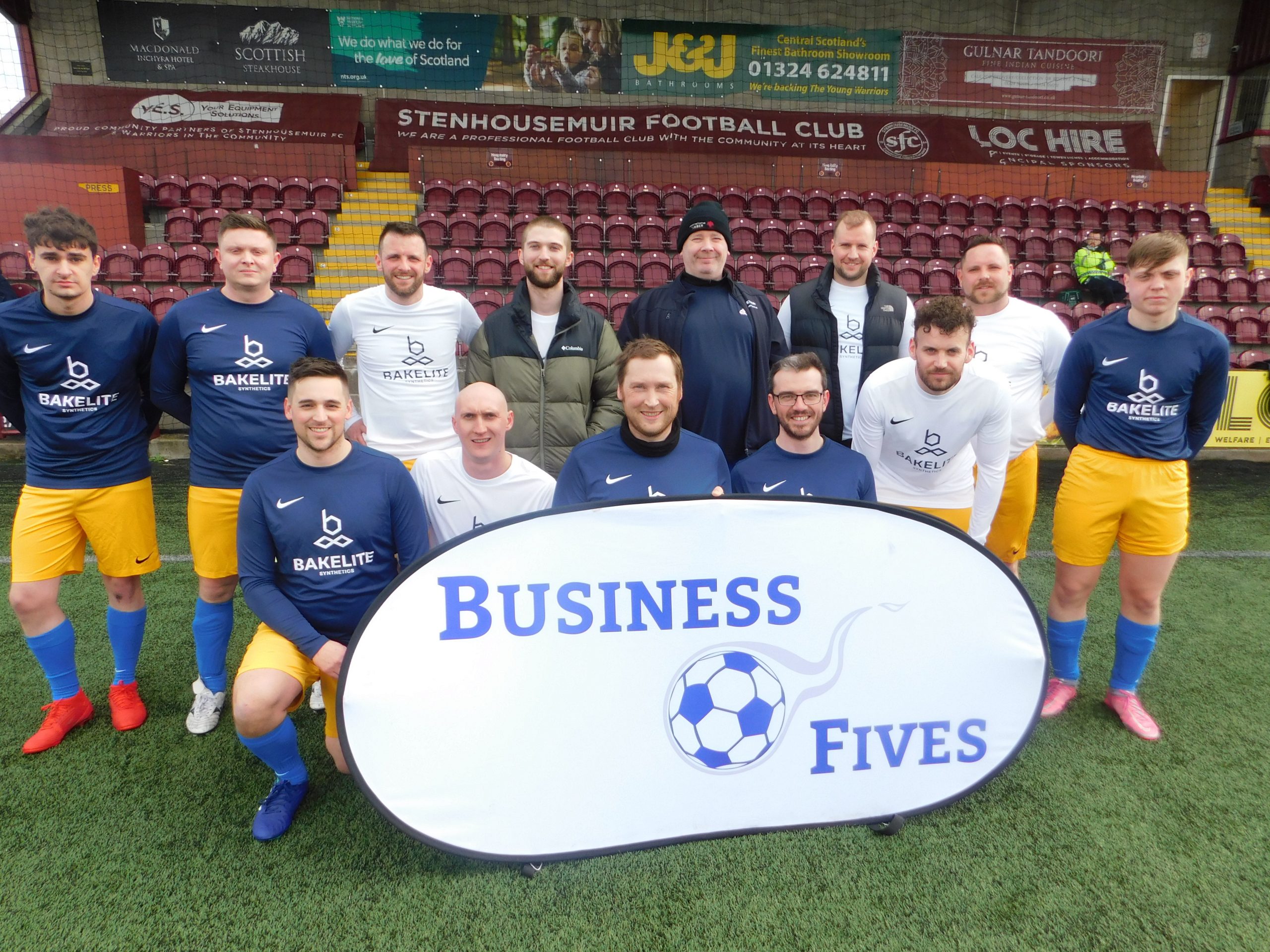 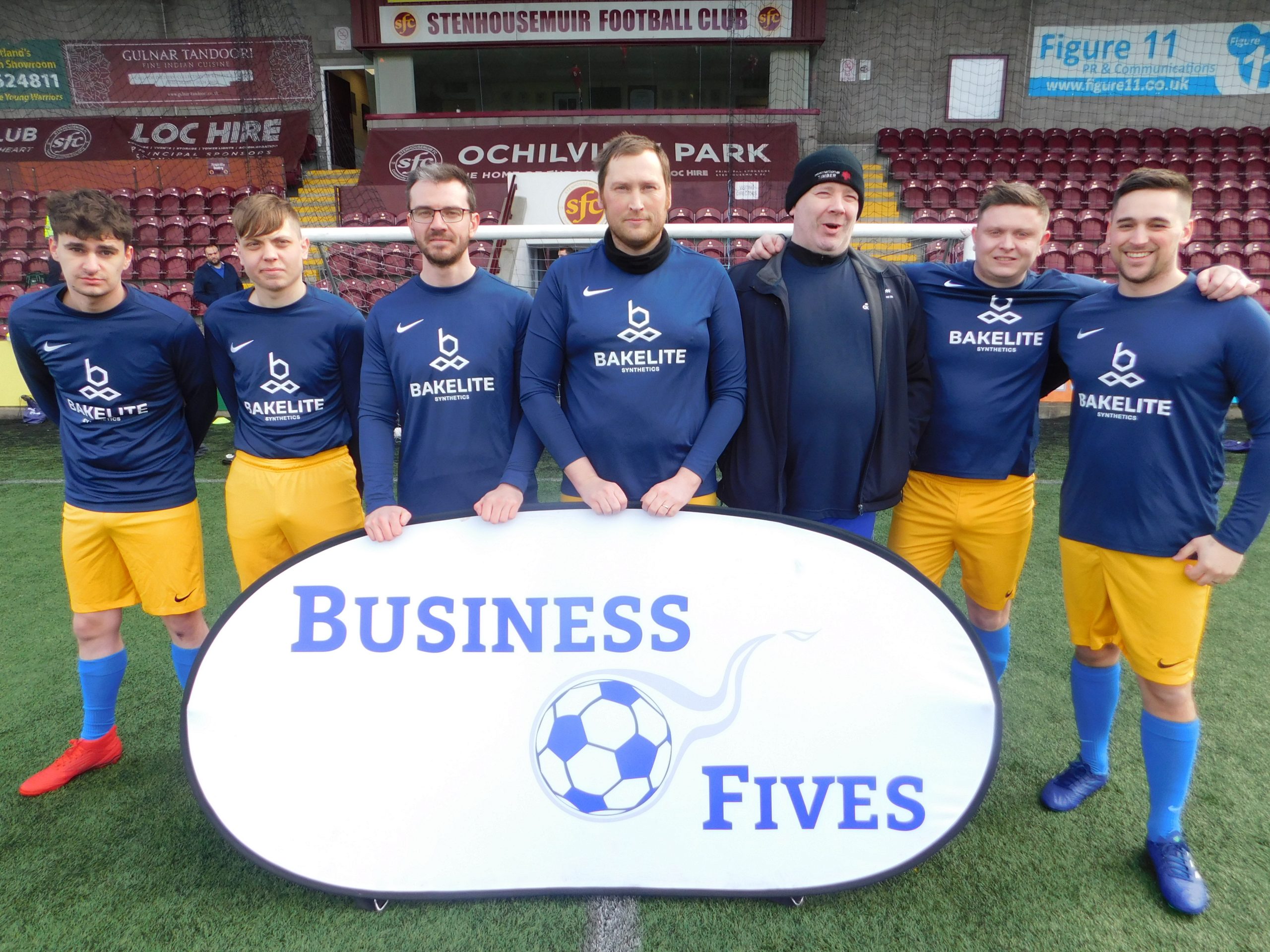 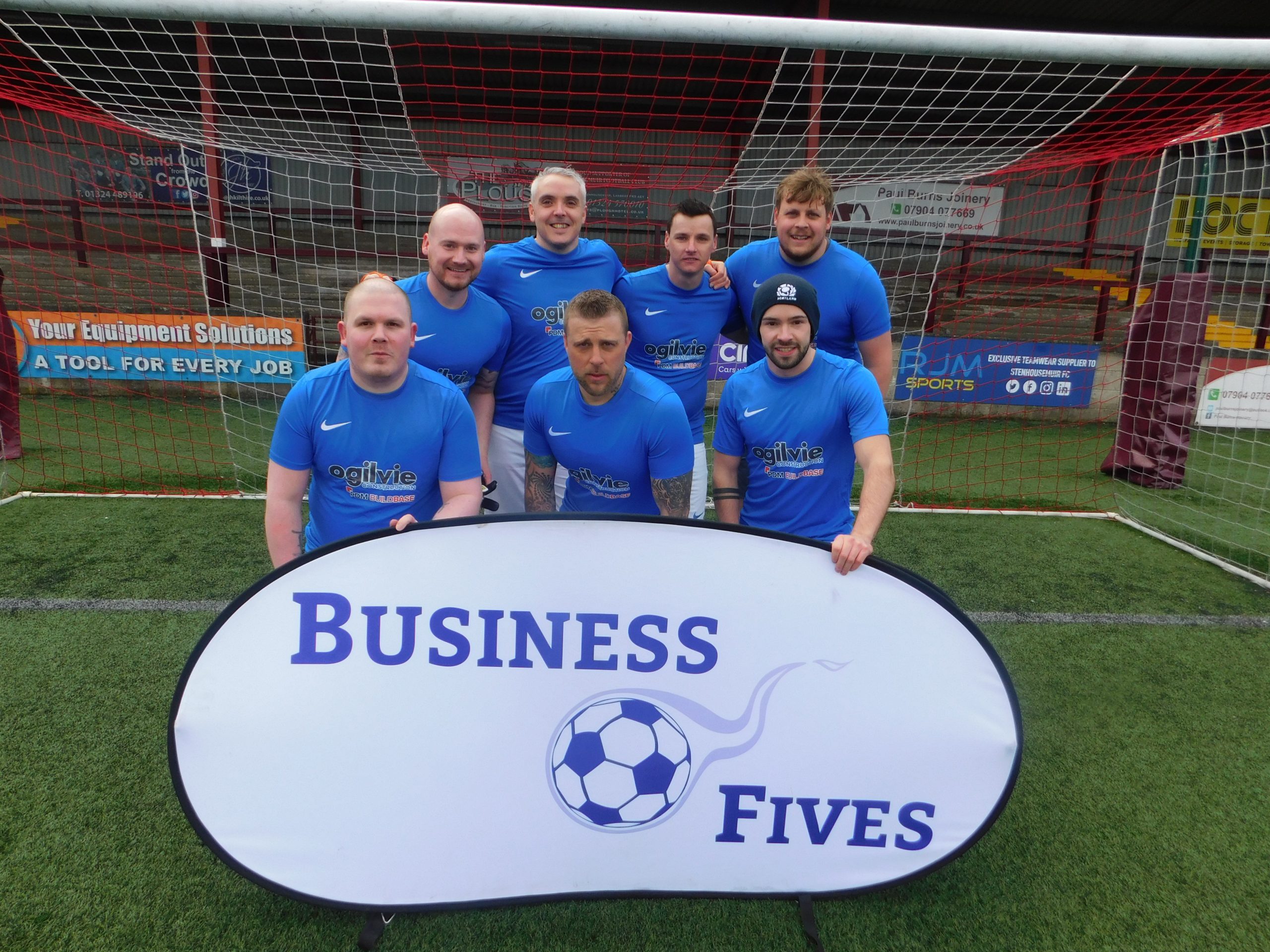 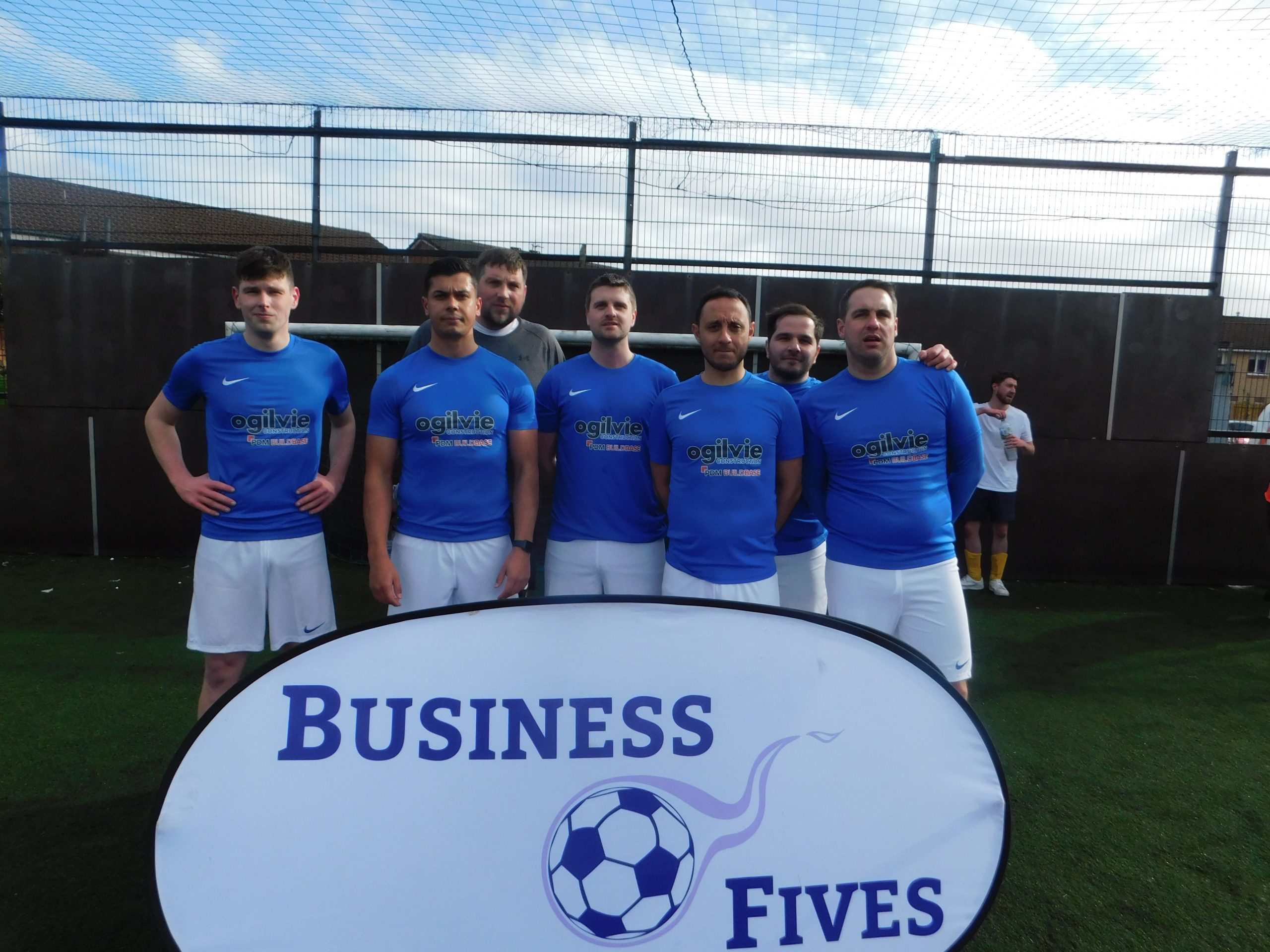 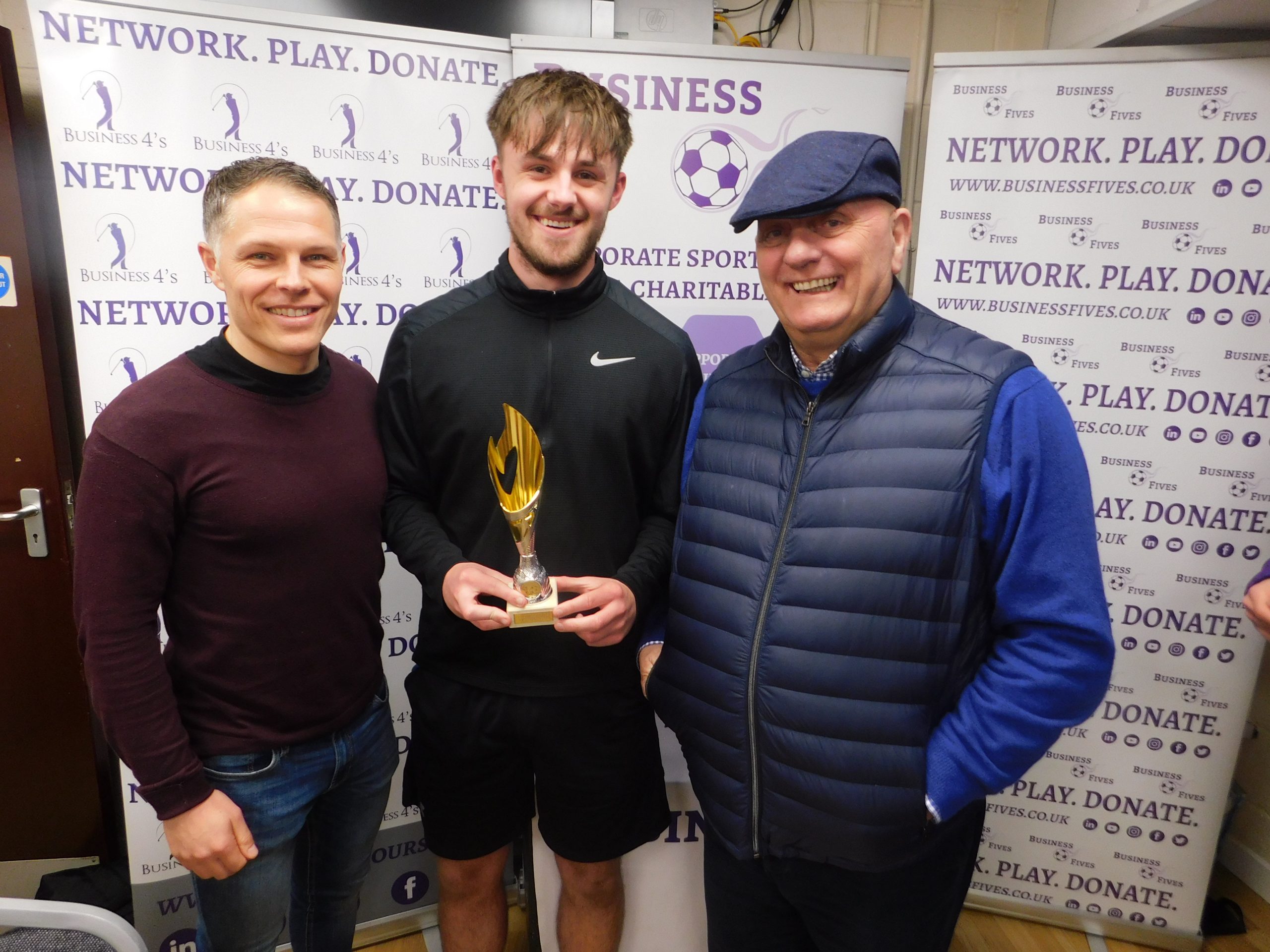 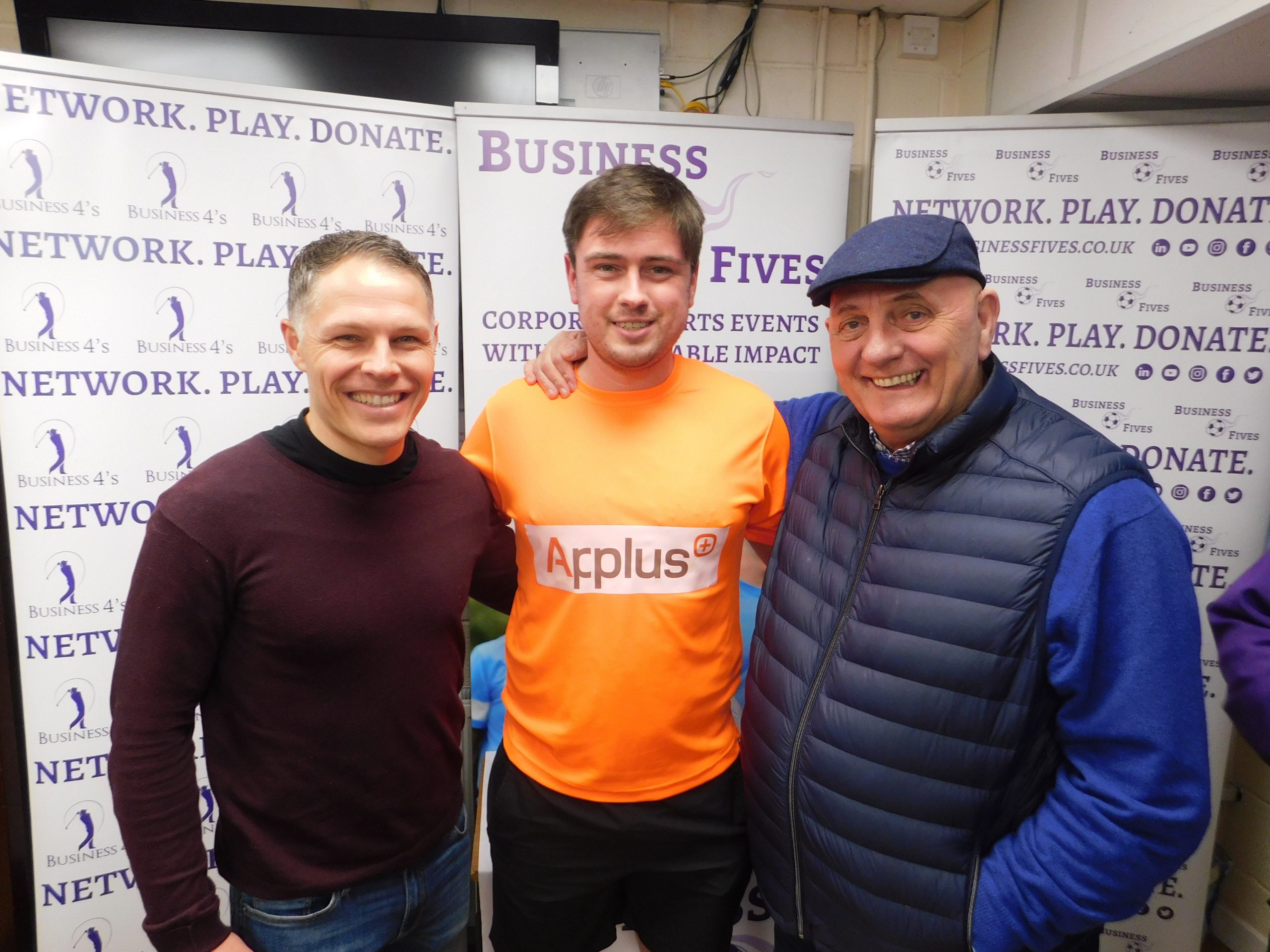 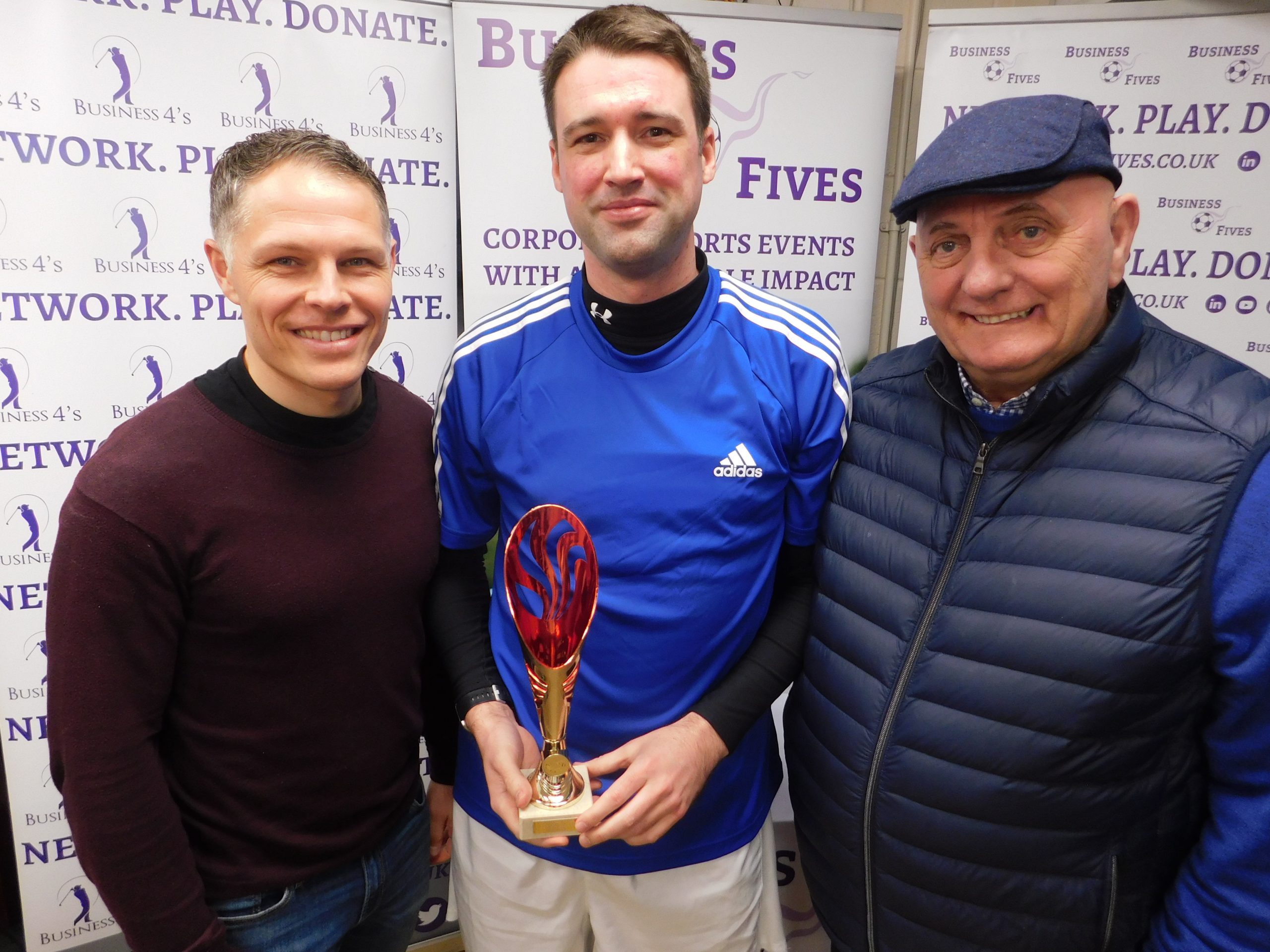 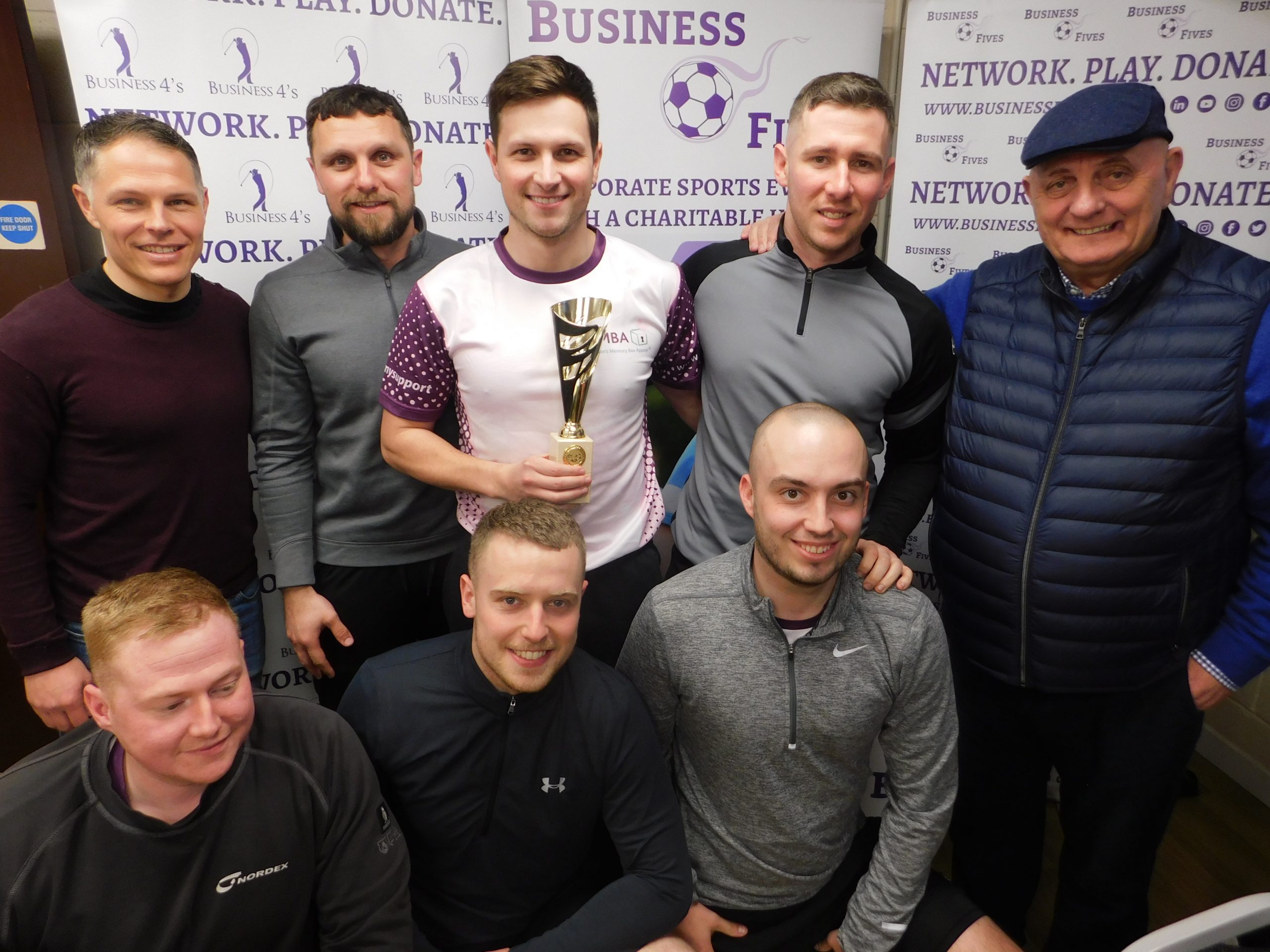 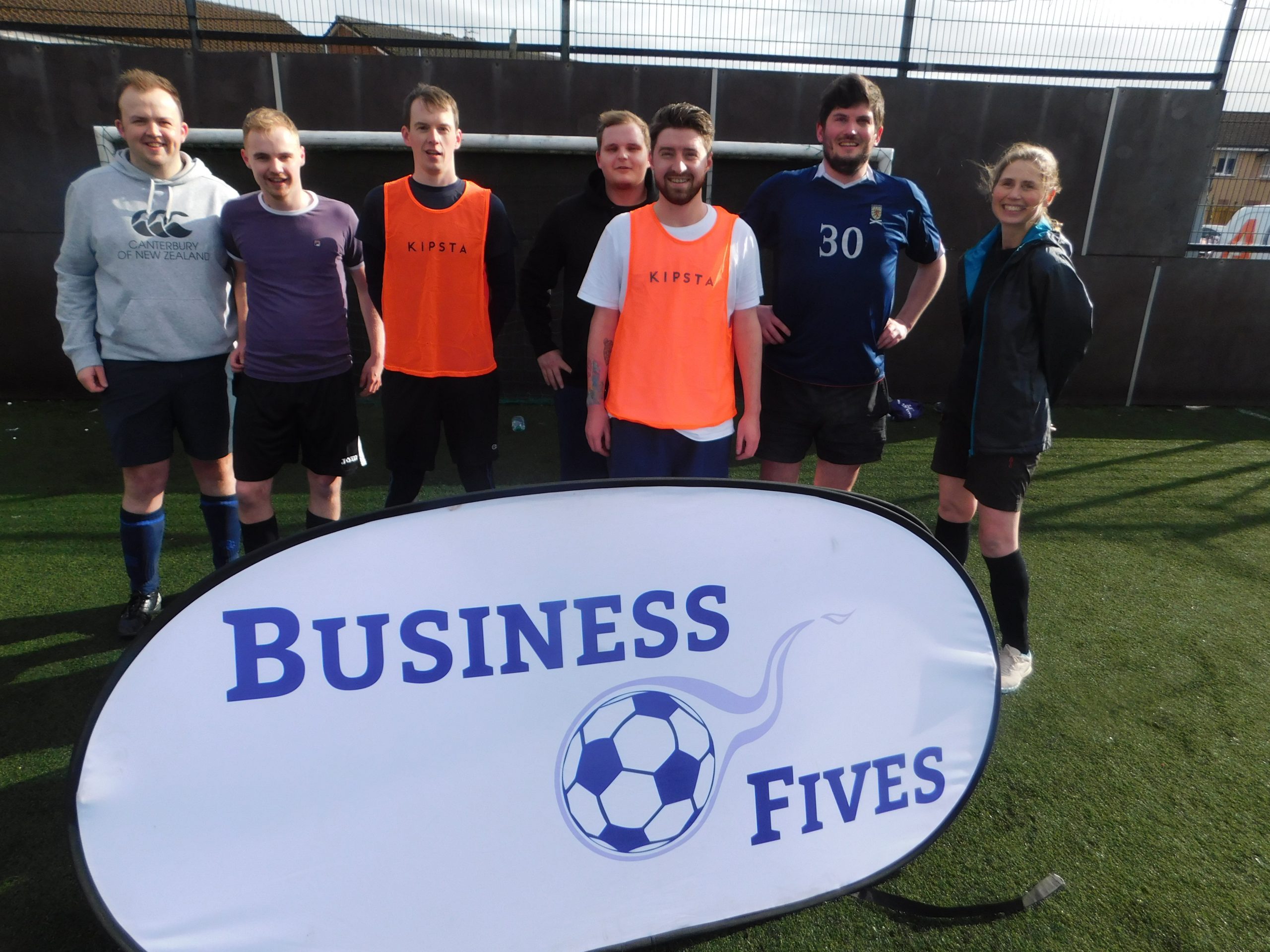 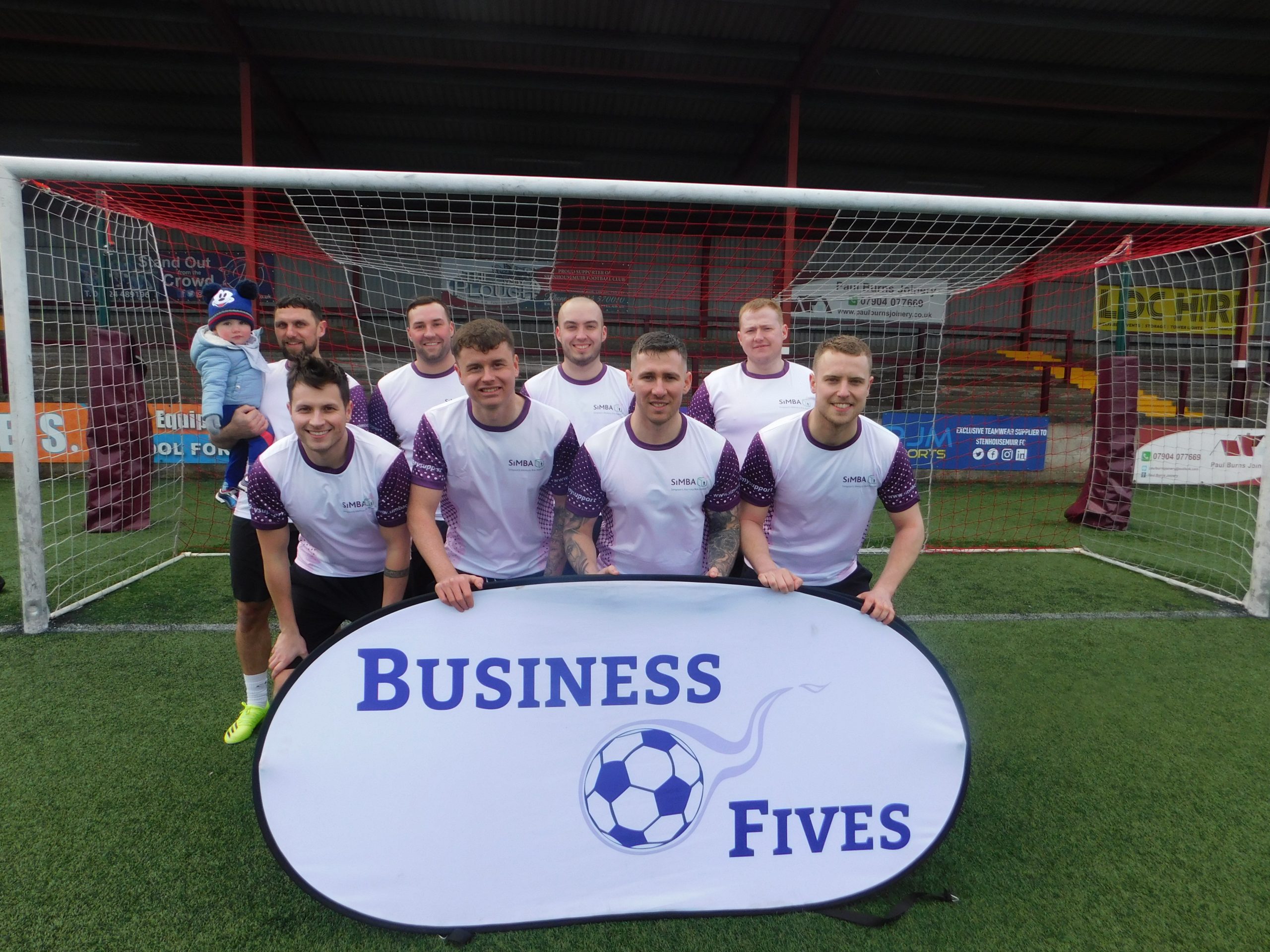 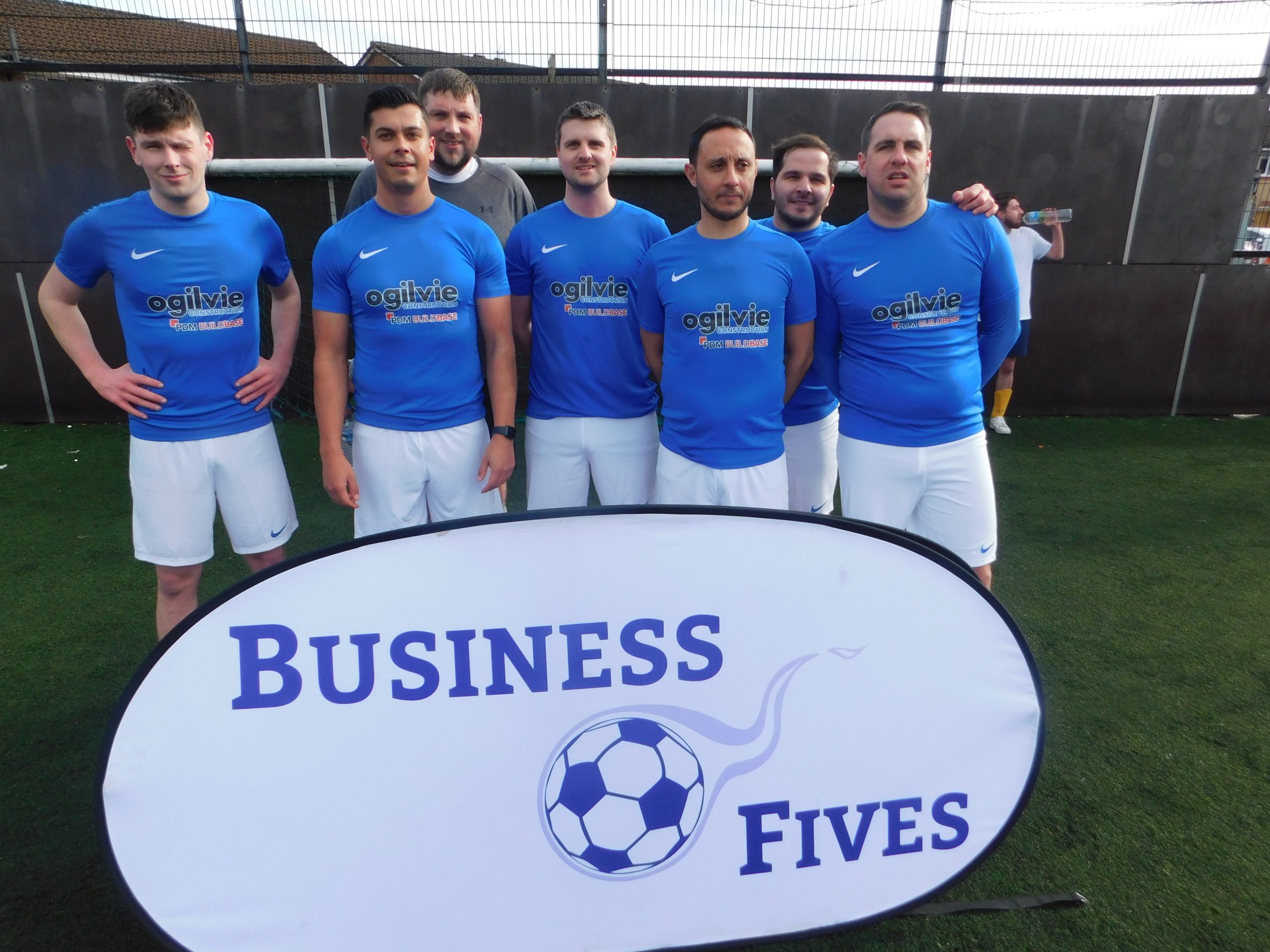 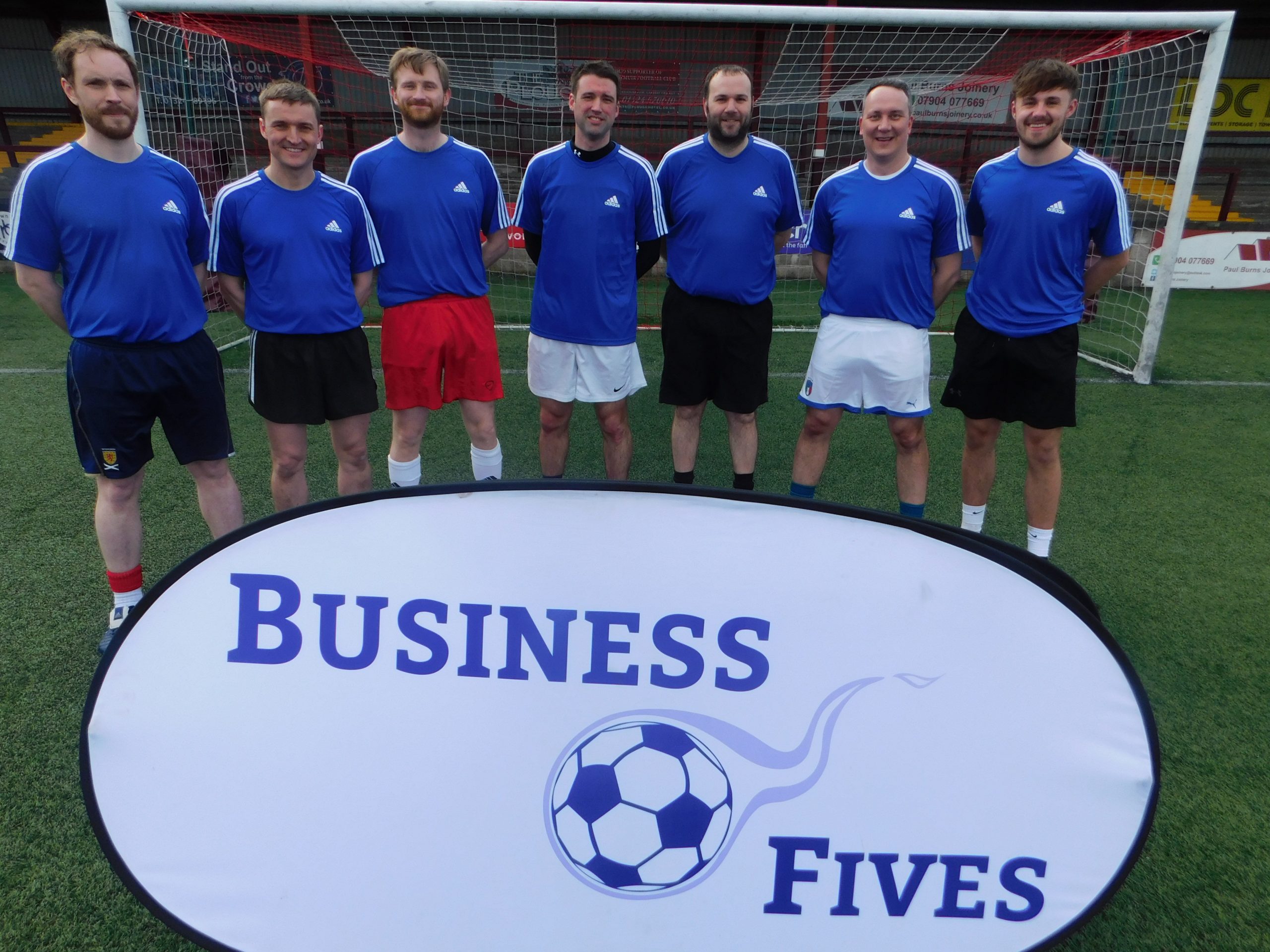 Business Fives returned to Forth Valley for the first time in 2 years. With a £5,000 donation up for grabs at the National Final and £500 to be donated to the charity of the winners of our Forth Valley event, there was a lot at stake for the companies taking part.

With all teams fundraising in advance, the companies’ combined to raise over £3,500 for charity. They also managed to score a very impressive 218 goals in 37 matches.

There were some notable contributions to this impressive total with Alex M Adamson raising £150 for Help for Heroes.

Emerging as our Top Fundraisers though, by quite a distance were the Ogilvie Group. They had entered 3 teams and raised a tremendous £2,500 that will be split between Beatson Cancer and Green Routes.

On the pitch, teams were split after the opening round robin, into Champions League, Europa League and Europa Conference League fixtures.

There were five National Final qualification spots up for grabs, for the Champions League semi-finalists and the Europa League winners, which meant the games were hotly contested.

Making it through to the Champions League Semi Finals and clinching their National Final spots were teams from Applus, FES Group, Diligenta and Nordex.

FES Group went into the semi-finals unbeaten but faced an Applus team who had only tasted one defeat. It was the Applus team who emerged victorious on penalties after a tense 1-1 draw. The other semi final was an exact replica, with Nordex claiming a penalty shootout win after a 1-1 draw with the team from Diligenta.

The final proved to be another tight affair, with some good football on display. It was the team from Nordex who ran out 2-0 winners to secure £500 for their chosen charity Simba.

The Nordex Team were led by Man of The Match, Connor Devlin who was picked out by one of our ambassadors, John Rankin.

In our other individual award, it was Charlotte Solberger from Ipsos who claimed the Player of the Tournament for some brilliant displays across their games. They were eventually beaten in the Europa League Conference Final by Bakelite.

In the Europa League section it was Ogilvie Homes, Ogilvie Construction Teams 1 & 2 and Bakelite Team 2, who found themselves in the semi finals and in the hunt for that final National Final spot.

After a cagey start, it was the Ogilvie Homes team who claimed the Europa League title after a 4-1 win and claimed the final National Final spot for the event in Glasgow on Thursday 7th April.

They were helped by tournament top goalscorer, Jay Foran who banged in 22 goals to help his side claim the Europa League Trophy!

The teams were then treated to stories from the playing and managerial careers of Scottish football icons, John Rankin and Dick Campbell after the tournament in the post match debrief before the medals were allocated.

The Business Fives action continues with the last qualifier in Aberdeen on Friday 18th March before concluding in Glasgow for the National Final. 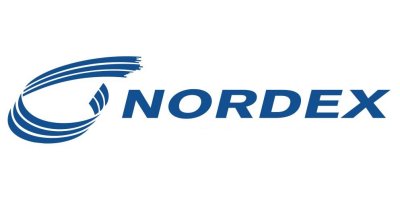 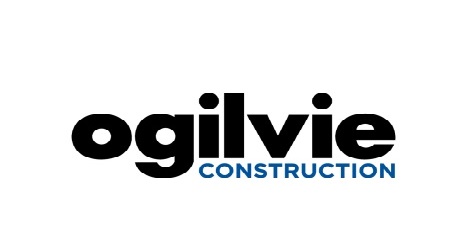